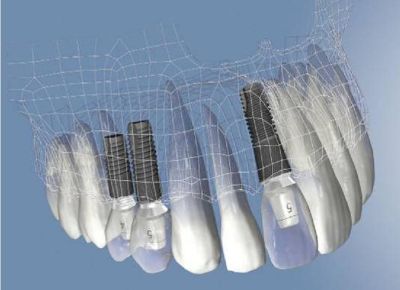 The Implantology represents the modern method of replacing the missing teeth, by sustaining the prosthetic crown through the dental implant. The comfort of the patient by using the dental implant reaches almost the comfort given by the natural tooth. The complex crown-implant re-establishes both the initial aspect of the tooth and the dental root. By re-establishing the endosteal part, the complex crown-implant reaches a maximum functionality, the transmission of the mastication forces being done directly in the interior of the bone.

The insertion of a dental implant becomes the election treatment in case of loosing of one natural tooth or several natural teeth. The placing is already a usual handwork offering the patient the possibility of a fix dental prosthesis, with increased dental functionality and higher comfort for the patient. The development in the last decades of the treatment through dental implant placed the implantology in a therapeutic group with a very low risk. As a conclusion, the therapy by dental implant becomes a very sure treatment for a long period of time. 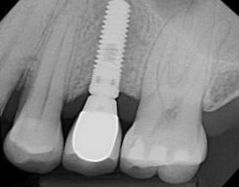 In spite of the title of surgery, the insertion of a dental implant is a minimum invasive handwork, with low risks, executed with local anesthesia. It is a painless procedure during which the patient can benefit of the comfort during any other handwork.