The implantology is a dental specialty approaching the rehabilitation of the dental arches with the help of dental implants. The dental implant provides a complete recuperation of the initial structure of the tooth. Read more ...

The Implantology (implantology - Wikipedia) represents the modern method of replacing the missing teeth, by sustaining the prosthetic crown through the dental implant. The comfort of the patient by using the dental implant reaches almost the comfort given by the natural tooth. The complex crown-implant re-establishes both the initial aspect of the tooth and the dental root. By re-establishing the endosteal part, the complex crown-implant reaches a maximum functionality, the transmission of the mastication forces being done directly in the interior of the bone. 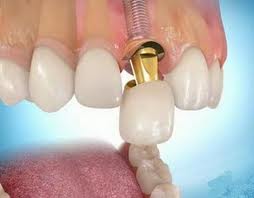 The intravenous sedation is an adjuvant work of the surgery for placing the implants. This work is performed in the dental office by an anesthetist, who monitors the patient during the entire surgery. The method of intravenous sedation is indicated both for extended surgeries and for the placing of one single dental implant, in anxiety (fear) situation of the patient.

After finishing this 'therapeutic pause' stage the prosthetics follows, stage in which the dental work is processed. The prosthetics stage can run for a time of two, three or several sittings.